Rich chocolate ganache can easily be made with milk instead of cream. Read on to learn how to make it on the stovetop or in the microwave! You can even make it in really small amounts when all you want to do is eat it by the spoonful. I do this all the time.

I've been making chocolate ganache for over a decade. I used to be a pastry chef but more than that I am just obsessed with chocolate.

What is chocolate ganache?

Chocolate ganache most commonly refers to a mixture of hot cream, high quality chocolate, and sometimes butter. The hot cream melts the chocolate and it turns into a silky smooth but thick glaze that tastes amazing on everything.

It can also be poured onto cakes, rolled into truffles, whipped into frosting, or piped into cupcakes for the most indulgent filling. It truly is versatile and tastes divine!

How do you make it?

Typically ganache is made with a 1:1 ratio of cream to chocolate. Cream is warmed up in a pan and then poured over the chocolate. It is then whisked into a silky smooth chocolate glaze. Sometimes butter is added toward the end to give it a lovely and shiny sheen.

At first it will be the texture of a thick glaze but as it sits the chocolate will begin to cool and it will become spreadable.

Chocolate ganache without cream is only slightly different. You need less milk or it will be too thin but otherwise it's pretty much the same. In this case though the butter is to make up for the loss of fat in the milk,

How to make it with milk instead of cream

How to make it in the microwave

You can also make chocolate ganache without cream in the microwave. There's two ways to do this:

Follow the recipe but instead of heating the milk and butter on the stovetop do it in the microwave. Make sure the butter is fully melted and the cream is hot. Follow the recipe as directed after that.

You can just wing it with a small amount of chocolate. I do this all the time because I LOVE ganache but I don't need a big bowl begging me to dig in.

I put a small handful of dark chocolate chips in a small cup and then add a splash of milk to it. It's better to add too little than too much. It shouldn't fully cover the chocolate. Microwave just until the milk starts to foam up in the microwave and then pull it out and stir.

Make sure you sit there and watch it in the microwave so it doesn't overflow. Enjoy with cocoa nibs, mini marshmallows, or dip some cookies into it for a quick and delicious treat. It takes practice but after a while the amounts will be like second nature. 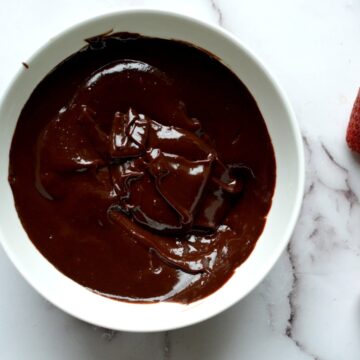 Carolyn
Rich chocolate ganache can easily be made with milk instead of cream. Read on to learn how to make it on the stovetop or in the microwave!
Print Recipe Pin Recipe
Prep Time 10 mins
Cook Time 0 mins
Total Time 10 mins
Course Dessert
Cuisine American, French
Servings 1 cup

For a thinner ganache that's better for pouring over cakes use ⅓ cup of whole milk instead of ¼ cup.
Keyword chocolate, gluten free
Share this...

Hi I'm Carolyn - Coffee Drinker, Mom, Celiac. I found out 5 years ago I had Celiac Disease and after a few tearful goodbyes I gave wheat the boot. Now I love to create incredible gluten free recipes anyone can enjoy! about me!